Since KYVE’s start in early 2021, the project has gone through a few significant transitions to best accommodate its widespread growth and capabilities. First, starting as a smart contract on Arweave, then in Fall 2021 switching to an EVM-compatible setup on Moonbeam, eventually pivoting to an application-specific Cosmos SDK Layer 1 blockchain in Spring 2022. With scalability limitations now behind us, we were able to rethink our tokenomics strategy to provide even more advanced and beneficial token utility possibilities.

The KYVE chain is secured through a Proof of Stake (PoS) consensus mechanism, allowing node runners to earn staking rewards and transaction fees in $KYVE. With this, $KYVE tokenomics must promote high utility to encourage high activity, maximizing overall network stability. Therefore, we’ve decided on the following: Inflation is introduced to incentivize node runners in the case of low activity within the network. However, if there’s high network activity, inflation is counterbalanced by fee burning. Let’s explain…

To get the best of both worlds, we decided to go with uncapped inflation schedules over time, providing validator incentivization in the case of low activity while also referencing the “EIP-1559” standard for the (partial) burning of transaction fees.

Initially, we expect the network to be backed by a high bonded ratio as we will be pushing for optimal staking and delegation as well as the inclusion of locked-up tokens in the bonded ratio. To create liquidity and reward validators, the team has decided to start with higher inflation, then proposes to lower the inflation rate over time when transaction fees cover the validator's costs. A higher maximum inflation rate is also chosen to incentivize users to re-stake their tokens thus preventing being diluted by inflation in case the Goal Bonded is not held.

On genesis, the network will start with the following parameters, which are modifiable via governance at any given time.

In order to participate on the protocol level, protocol node runners must stake $KYVE tokens on the chain. Once running, their proof for uploading valid data is submitted to the chain and voted on by the other nodes. It’s important to note that nodes can participate in multiple pools at once (via inter-pool security, a feature to be released at the beginning of November 2022). However, if they misbehave, their tokes will get slashed.

Protocol nodes receive rewards via pool funding which gets paid out for each data bundle produced. The amount of $KYVE paid out can be determined by the governance per pool (Operating Cost). If a pool runs out of funding, it pauses until it has been refunded. This creates an incentive for projects that depended on the data to keep funding the pool, meaning that the network utility drives the protocol level.

Since protocol nodes currently relay the data to Arweave, they pay in $AR. To compensate for the $AR payment, node runners receive a storage cost payment in $KYVE depending on the data size. Seeing that KYVE can upload data onto any permanent data storage solution, these same mechanics will apply to any future storage backend supported by KYVE.

On both the chain and protocol levels, there are community taxes being paid to the treasury. These taxes can be adjusted by the governance.

To prevent pools from being taken over by malicious, hefty token holders, they will automatically pause if the total stake is too low. This provides security for the validated data.

To ensure that these parameters get configured over time in the spirit of the network, KYVE is determined to introduce an effective governance mechanism.

On genesis, the network will start with the following parameters which are modifiable via governance at any given time

Given the persistent demanding market and macro conditions and the fact that we closed our last round at the end of the bull market cycle, we updated our token release schedule to better prepare for possible sell pressure from earlier round participants.

A “DEX first”-approach additionally emphasizes the relevance of this consideration. Thus, the KYVE team answered this inherent sell pressure with a decaying cliff and a block-based token release schedule for the token buyers.

Consequently, it takes up to four years to fully release first-round participants’ tokens, compared to only one year for the round three participants. These measures ultimately serve the network stability and the smooth launch of the protocol into the market. See table here. 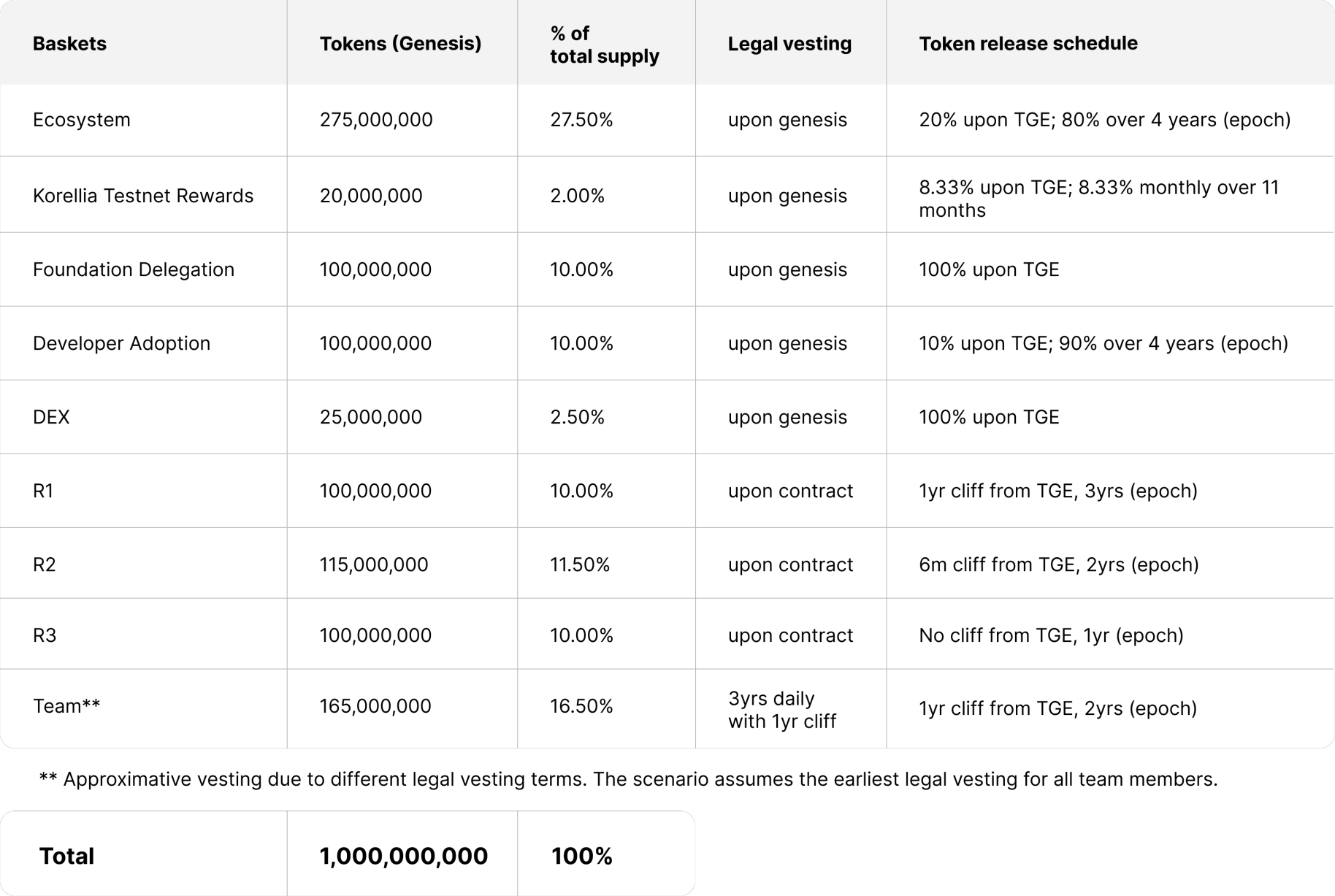 Seeing that locked tokens affect the Bonded Ratio, it’s important to include some baskets in the bonded ratio. However, they won’t participate in the PoS. Any tokens transferred from the baskets and turned into liquidity will not be counted in the bonded ratio unless they are actually staked or delegated.

For the Korellia Incentivized Testnet Rewards, 1% of $KYVE tokens will be rewarded to the users, and 1% will be used for protocol-level foundation delegation. See the breakdown of these token rewards in our recent Korellia article. 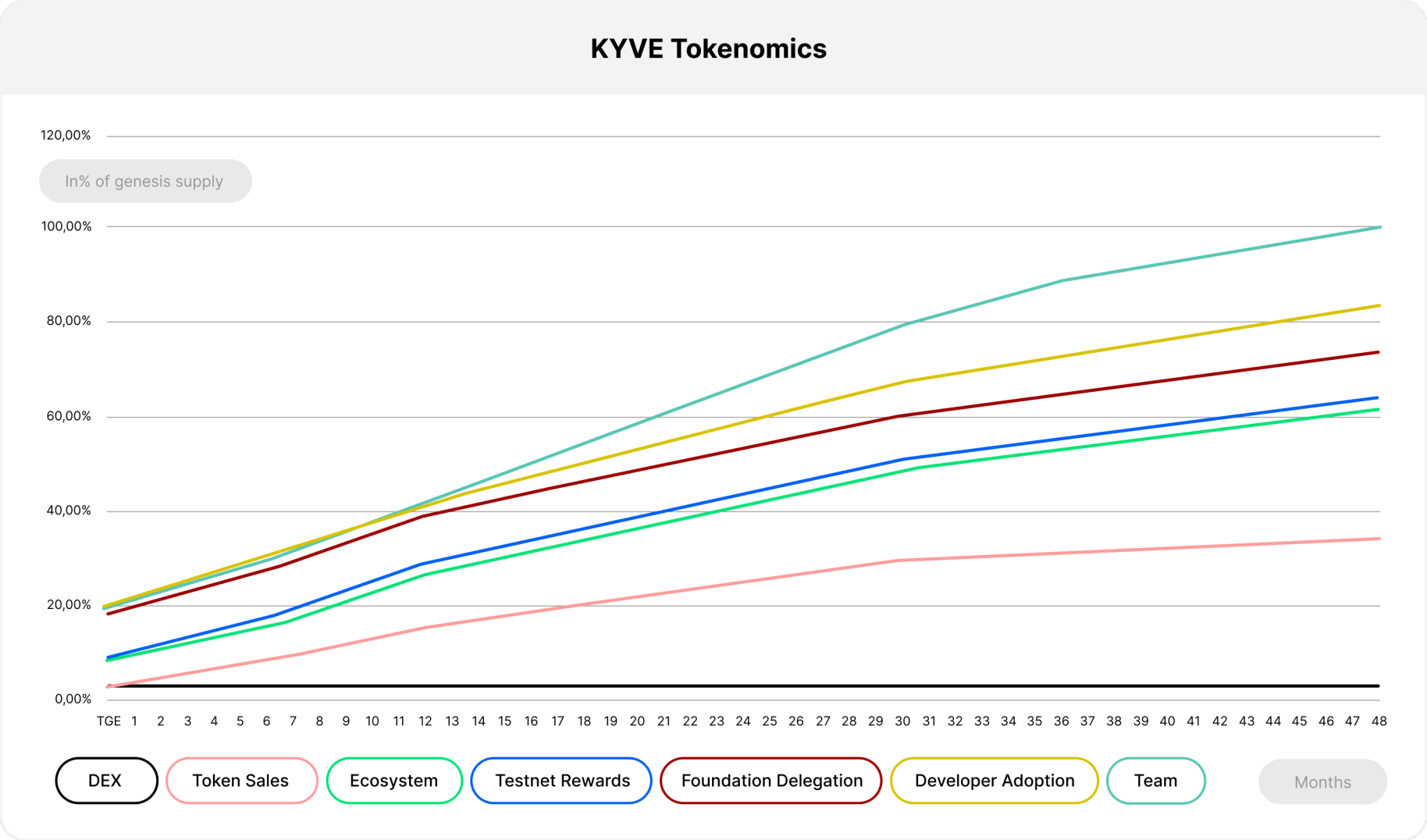